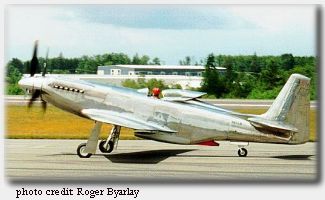 At first glance, one might assume that this is a picture of just another "stock" Mustang - with a somewhat enlarged vertical stabilizer. Upon further examination, you would probably notice that there are 6 blades on the prop, not 4 as usually found on a stock P51. Noticing the small canopy and turtledeck you start to question your first impressions- following the line down to the horizontal stabilizer you'd see that something looks a bit odd about the shape. Then, what the hell - that wing doesn’t look very stock ! Neither does the main landing gear for that matter! Just what kind of aircraft is it anyway?

Well my friends this is a racing hybrid, one which has been foretold for many a year - but has never quite been ready got the "prime time" that is Reno - till NOW!!!!!!! First a little background on the subject before we get too far along.

Vendetta was a dream that came to fruition at Reno in 1989. Not only was this aircraft particularly well cleaned up (aerodynamically), but it also sported the wing and horizontal tail of a Learjet! As we all know the P51 Mustang was, for it’s time, the best that technology had to offer. Since that time there have been great advances in wing design, and most all of these advances have been incorporated into the Learjet airfoil. As does war, racing breeds improvisation and cutting edge technology - it was just a matter of time before the two met as one. Tom Kelly was the man who put these two together, and thus Vendetta was born. She qualified for the 89 event, but due to engine problems (at that time, she was fitted with a V12 Merlin using the standard 4 bladed prop) didn’t race. Shortly thereafter, the aircraft was severally damaged in an accident.

Now we take you to the present. Veteran air racer Gary Levitz, together with Bill Rogers, both visionaries that don't discount the unusual, and apply practical answers to difficult questions. Their vision in this case - similar to that of Bruce Bolland and others in the air racing fraternity - is an unlimited air racing plane capable of speeds that would leave the rest scratching their heads. They've taken Tom’s idea, and improved upon it.....in a very big way!

Miss Ashley II is the result. A Learjet wing and full flying stab mated to a highly modified P51 airframe, with a huge Griffon V12 powerplant and twin counter-rotating propellers. This is a true engineering marvel (or nightmare if you happen to have been one of the lucky few to be involved in the project <g>). Levits and Rogers, together with a mostly volunteer crew of dedicated and talented individuals, have overcome huge hurdles in getting this aircraft off the ground. The airframe modifications to allow for a Griffon engine to be used instead of a standard Merlin are no cake walk. Add to this the problems associated with trying to mate a jet aircraft wing to a prop driven plane, adding a full flying stab as well as the hydraulics and other flight control mechanisms that had to be tailor made for this beast could send someone to the loony bin is short order. Oh, but success *is* at hand. This bird is now a reality - and yes, it’s taken to the air on more than one occasion.

Facts are still sketchy but as best as can be determined, the plane is complete and flight trials are ongoing. The airframe has been "shaken down" and current development surrounds the engine/power department (the business end of the aircraft). This is by no means implying that the engine is not working well, quite the opposite! The Griffon is the "big brother" of the Merlin. British engineers took all the weaknesses and pitfalls of the Merlin, corrected them and created an engine that displaces 800 more cubic inches than its predecessor. As far as V12 engines - the Griffon has no equal. But in racing, the Merlin has the advantage of being designed to fit into the confines of the cowling of a stock Mustang. It has been the workhorse for many a year and the people working on them know exactly what it takes to make that engine a proven winner. You can only go as fast as the engine will let you - and that is governed mostly by one thing - fuel. Only by optimizing the engines capability with the correct blend of fuels yields winning results. This involves finding the right combination of aviation fuel and other exotic mixtures including but not limited to nitromethane, nitrous oxide, water injection and methanol. This is the area of development that Gary and his crew are working on. Our sources tell us, when asked if the engine was putting out the power they hoped for, the team's response was "we’re gettin’ there!".

Will it be at this years event? Well, let’s just say that the crew is working 6 and sometimes 7 days a week to see it happen. This aircraft has been entered for competition at Reno for the last 2 years, although it has never made it to the event. But you know what they say - the third times a charm ;-)

Cya in the pits,

(stay tuned.....there is more to come on this delightful development -ed-)

[back to RENO main page]